Press enter to begin your search

Our research focuses on understanding the molecular principles that instruct mammalian development. Specifically, we are investigating the gene regulatory mechanisms that coordinate tissue specific gene expression during heart development. We are also using lessons learned from these studies to develop novel therapeutic and stem-cell based strategies for mending a broken heart.

Our research focuses on 3 main areas:

Our lab has made fundamental contributions to the fields of developmental biology by uncovering novel mechanisms of gene control. These discoveries highlight the diverse mechanisms used by cells to regulate lineage commitment. For example, our work has shed light on how chromatin structure influences cell fate. For example, in addition to the panoply of histone modifications, histone variants play key and understudied roles in regulating all DNA mediated process including transcription. Our lab showed that replacement of the core histone H2A by its variant H2A.Z at the promoters of lineage genes is necessary for proper execution of developmental gene expression programs in ESCs. We further demonstrated that H2A.Z cross-talks with histone “readers” and “writers” to coordinate transcriptional output at target genes.  Moreover, H2A.Z works in concert with the RNA exosome to control expression of divergent, promoter-proximal noncoding RNAs (ncRNAs). Thus, we continue to investigate how H2A.Z incorporation acts as a molecular rheostat for regulating developmental programs (Figure 1). Specifically, we are investigating the role of ATP-dependent remodelers in regulating H2A.Z and transcriptional dynamics.

We also investigate the function of long non-coding RNAs (lncRNAs), a new class of regulators of gene expression, in regulating lineage decisions. We discovered Braveheart (Bvht), a lncRNA necessary for activation of a core cardiac transcription factor network. Our work showed that Bvht functions, in part, through a small motif that interacts with CNBP to regulate cardiovascular lineage commitment. We are currently investigating the in vivo roles of Bvht and its specific effects on cardiac muscle structure and function. This work has led us to also study the broader roles of RNA in development and disease. 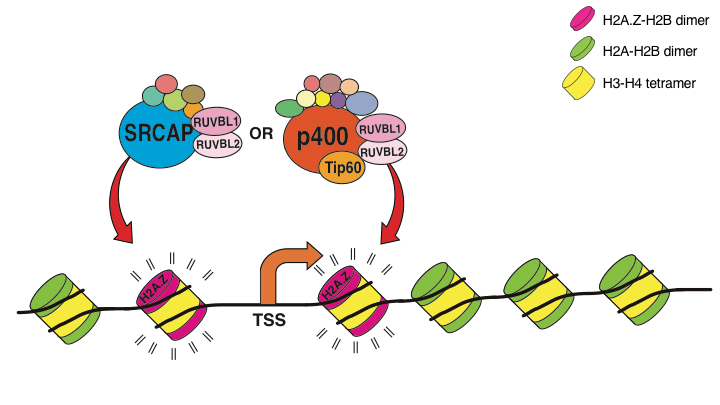 2) Dissecting the control mechanisms that drive remodeling of gene programs during cardiac development and regeneration.

Characterizing the master transcription factors (TFs) that act as key sensors and actuators of developmental signaling pathways during cardiac lineage commitment is key for understanding heart development and how faulty regulation leads to congenital heart defects, the leading cause of infant death. We employ both iPSC differentiation and mouse models to map the enhancer-gene networks that drive heart development. From these data, we have inferred new candidate master TFs that we are currently characterizing using genetic and genomic approaches. We have also leveraged our enhancer maps to identify novel genetic variants associated with cardiac traits and heart disease.

Remarkably, the heart continues to develop after birth in response to the increased pressure load and energy demands of cardiac muscle. During embryonic heart development, cardiac muscle cells (cardiomyocytes or CMs) utilize glycolysis to grow and divide. After birth the heart continues to develop and CM maturation is characterized by a metabolic switch to oxidative phosphorylation as reflected by the now oxygen-rich environment and increase in mitochondria. The transition to oxidative metabolism is a prerequisite for the differentiation of functional cardiac muscle and concomitant with cell cycle exit and loss of regenerative potential (Figure 2). Our recent work showed that gene networks deployed during normal postnatal maturation of CMs are reversed during the injury consistent with models of cardiac regeneration in zebrafish. Thus, our lab is currently investigating the precise mechanisms that drive normal maturation in an effort to stimulate cardiac regeneration in the adult.

Figure 2. The heart continues to mature and grow after birth. This process is characterized by dramatic transcriptional, epigenetic, and metabolic changes concomitant with the development of rigid sarcomeres and cell cycle exit. As the heart muscle matures, it loses its regenerative capacity. We are currently characterizing the molecular networks that drive maturation in an effort to define new therapeutic strategies that can reactivate the regenerative response.

The field has largely used hiPSC-directed differentiation strategies. Though this method has proven very useful in reconstructing global regulatory architecture, these approaches are limited in their ability to model the multi-cellularity of organ systems. Subsequently, by leveraging our genetic blueprints of heart development, we hope to develop innovative approaches for building “heart” tissue in a dish (Figure 3). Thus, we aim to 1) determine key nodal points of the gene blueprint that instructs heart development, 2) to use this information for improve the ability to differentiate human iPSCs into mature heart tissue that will serve as a better model for pharmacology and regenerative therapy, and 3) to discover fundamental principles that can be broadly applied to improve stem cell based regenerative therapies.

Figure 3. Engineering mature cardiac muscle from human stem cells has tremendous potential for regenerative medicine and as a system for drug and toxicology screening. Pictured is a high- resolution structure of sarcomere organization of a mature cardiac muscle. Additional research is needed to achieve the functional and structural characteristics of mature muscle from stem cells.